The weekend started early for our two soloists who participated in the morning section at St. Matt’s Anglican Church on Saturday 24th August. The Eb Bass section commenced proceeding with Chloe Higgins playing Suite 1 by John Stevens, a piece that showed off both Chloe’s amazing sound and ability to change the mood with ease – switching between driving notes and wonderful legato phrases.

Rohan Leighton had a bit of a wait before his turn in the Eb Soprano Cornet section, but filled this time helping out in the warm up room as one of our volunteers that ensured the day went seamlessly. Coming on stage, Rohan played Demelza by Hugh Nash, focusing on the expression of the piece and showing off his ‘softer’ side.

Both players played brilliantly and were well received by to the adjudicator and the audience, and won their sections! They will compete against other Open-section winners in the Champion of Champions event later this year. 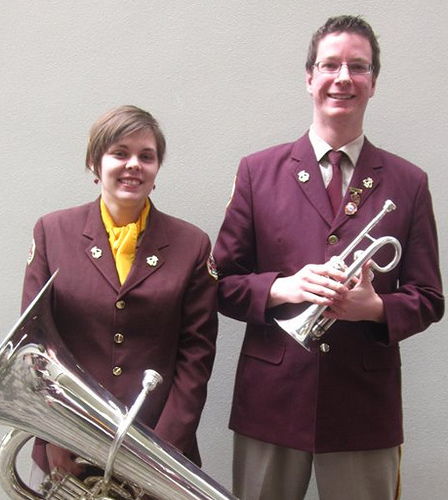 On Sunday 25th August, Enfield Brass competed in Open C Grade Brass under the baton of Assistant Musical Director Shayne Tarling. The largest section of the band competitions,  C Grade featured five bands – including Mount Gambier City Band, who attended the contest for the first time in many years.

The test piece, Rhapsody in Brass by Dean Goffin, presented many challenges, which the band enjoyed rising to. For the sacred item, we performed Leonard Ballantine’s ‘Mid All the Traffic and for the stage march, Army of the Nile by Kenneth Alford.

While the plan was to conclude our competition weekend with a Parade of Bands late Sunday afternoon, the weather in the lead-up stopped this from happening as the parade area was too soggy. However, this means we’re already on the front foot for next year’s competition, and continue to keep the other bands guessing as to our change of direction!

We appreciated the extra assistance from our regular Enfield helpers Mark Hall and Carolyn Gilham (now Baritone Champion in three states!!!). Also appreciated was our other volunteer for the competition, Dave Moss. Appreciated most of all was the team at SABA for once again putting on a fantastic weekend and ensure everything ran like clockwork.

We are now looking forward to our next gig – Oktoberfest at the Para Hills Community Club in late September! The lederhosen is  coming out of the wardrobe and we’re brushing up on playing Ein Prosit one handed…